Ok so I was at this restaurant two days ago. (I am not gonna name it so lets just call it Foodland. No wait! that's just as big as restaurant. Damn you names!)

Now usually when we enter a restaurant, I straight away go to the washroom and wash my hands before sitting at the table. Because I don't like getting up from the table once I sit on it... on the chair not the table.

And as usual, in the washroom I just kept my hand under the tap expecting water but nothing happened and that's when I realized that this tap was not sensor based. Stupid much? And if that wasn't embarrassing enough I was standing right in front of the men's washroom and the guy that came out dashed into me as soon as he opened the door. Thankfully he was around his fifties cause it would have been more embarrassing if it was a cute guy near my age.

I usually don't look at the waiters who bring up the menu and set the plates on the table. It might sound rude when I say it like that but it's only because I feel sorry for them. I mean nobody wants to be waiter picking up dirty dishes and looking at other people eat good food.

So I was looking at the menu and just glanced up at the waiter and I was BLOWN AWAY! He was soooo cute. I was trying to be all calm and collected but I don't think I did a good job at it.

Now I am just gonna fast forward and get to the point where I embarrassed the shit out of myself.

I was eating the chicken tikka and the piece that I was about to eat was a big one and for some reason I could not cut it so without any delay I just stuffed it in my mouth and guess what? He came around the corner and looked right at me. Now just imagine me as a curly haired, brown skinned and not really fat or skinny (But with a humongous waist) girl with chicken filled in my mouth so that both my cheeks are protruding like Pikachu.

Yes, that was exactly what I looked like because I saw the guy look away and chuckle. And believe it or not I was also grinning at myself because I just felt so ridiculous. But it was pretty difficult to grin when my mouth was stuffed like that.

Anyways after that the whole ride home I was just smiling at my stupidity and I know it's not such a big deal but it was worth mentioning... I guess. 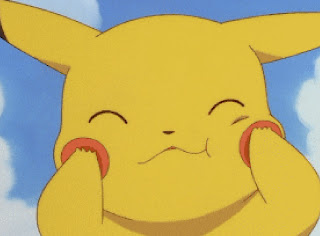