I am pretty sure that many girls (And probably a few guys) out there, love watching this series and have been watching it since forever but I just started watching it today. And that was only because Beez forced me to.

Actually Beez has been forcing me to watch it since the beginning of summer vacation (Even before that if I remember correctly) and I had promised her that I would but never got around to actually doing it. But for the past few days she has been really forcing me to watch it. She started bringing it up in every freaking convo we had and so finally today I started watching it.

At first I thought that I wouldn't really like it since it sounds soooo girly and I thought that it would be all sappy romance stuff. But it's pretty good mainly because Chase Crawfords in it! Duh? Why wouldn't I like it, right? (Haha)  I am just kidding though. I really like how the plots unfolding. I can't wait to know who Gossip Girl really is. (I just hope it's not a guy. Now that would be wickedly gay)

Here's what I have to say about it so far:
Nate's a Hottie and a sweetie.
Chuck's a jerk (No more words needed. I just hate the way he talks.)
Blair's a bitch but I feel sad for her since Nate cheated on her.
Serena's sweet (I like her more since she goes out with Dan to the concert)
Dan's really funny and cute.
Jenny is an innocent cutie pie. (I hope she and Serena's brother end up together)
I hate Nate's dad, Serena and Blair's mom. (All of them are so self-centered) 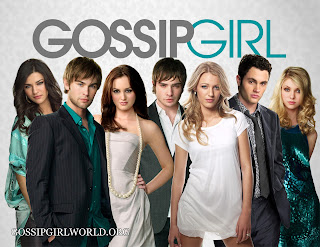 And that's probably it. I hope I watch all of the series since I usually don't end up watching all the episodes of anything. (Sorry Beez. I stopped watching Luck (life) Unexpected after episode 6 even though I loved it) (Great! I even forgot it's name! -_-)

P.S: I don't have anything against gays or lesbians.